I was waiting for these kinds of questions to come. The answers to the questions are straightforward, and even some of those who asked found their answers.

Not all of the so-called tectonic plates are, of course. An answer to the question is in this part…

Shouldn’t some of the things described as underground plate movements not be the movement of giant living spaces that I described at night and called the metal box system?

What should Mfs do if prominent scientists are stuck with these if they still resist not opening their horizons? I think it’s time to consider whether they might be malicious.

In our world, a great deal of science and technology has been achieved, despite the insidious interception of the alien parties who are secretly amongst us.

Today, even at the limited and hindered level of science and technology, we can scan deep underground, determine soil and rock types, and detect magma and volcano parts. Even if these are volcanoes that have ceased to be active a long time ago, even with our level of technology, vehicles can be made that will not burn if you throw them on the volcano, will preserve its integrity, and will not pass a caustic level of heat inside.

We now know a lot about the natural balance of the planet. According to these balances, we have already discovered the winds, gases, magnetic field balances, the living, finding direction, shaping, and spreading of biological diversity. The system I described is not the only one.

While some artificial islands or artificial continents are built entirely like a sea or a spacecraft, some of them are a kind of filling techniques made with different techniques by deciding that they will not move again, and as I always say, these past technology eras, current science, and technology It was so advanced that it could not even compare with our level.

In other words, while the previous works were being carried out, matter, light, stone, soil, and the bodies of living things were not looked at with the eyes we are looking at right now, lifting huge weights was like child’s play.

Even now, artificial intelligence exceeds our intelligence. Still, they were at an even more extreme level then, and as you can see, these systems were not made by employing billions of people, putting in a lot of effort, and spending a lot of time. For him, there was science, technology, and tools.

Now let’s move on to the answer to the other part of the question. Even today, if great work is to be done on land if a considerable facility is to be built there, whether there is an earthquake zone, whether there are magma movements, and many other things are not looked at.

Would those who could install these systems at that time undertake such work without looking at them from these aspects?

Of course, if they are going to make a large artificial island that stays in place, looks natural from the outside, and looks like a metal box, they will make some subtleties when placing the living space like a metal box; they will not close some areas.

They will naturally rise from there, and they will allow the magma to rise to the very top of the artificial island, and for people at that level of technology, it’s not even a problem.

For this reason, there is intense magma movement in Japan, and on such an island, there are volcanoes; it is unnecessary to say how artificial islands can be there. After this explanation, it is necessary to draw attention to the USA again.

Scientists follow some tectonic plate/plate movements in the world closely. Some of these also occur on the Oregon and Washington coasts.

Now, if the “real” and honest scientists of the world looked at these matters this way, they would immediately grasp everything.

Since this is their field of expertise, they will be able to explain these issues more accurately and detailedly than I can.

As in my correspondence shared at night, there are artificial parts, artificial plates, or to put it correctly, living spaces such as metal boxes under it, on the coasts of the American continent and especially on the shores of the USA; there are parts filled with rocks and soil at a very high level. Here’s what I told you. They are losing control of them. They haven’t done most of this themselves. Their technology was insufficient; many alien species are living in them now… They found it ready; they mainly settled.

Nowadays, they cannot even take proper measures against their looming disaster.

This is a great danger for them and the human communities living on these filled artificial beaches.

It has always been talked about that the Mayans believed that Doomsday would come in 2012. A famous earthquake/disaster movie called 2012 was also shot. 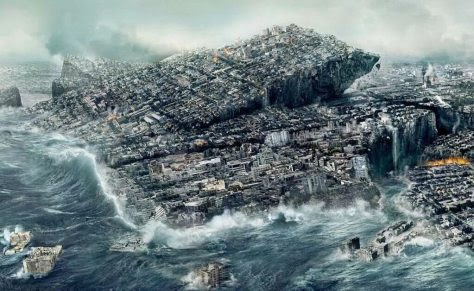 In that movie, the beaches of the USA were lying and sinking in the waters of the ocean, just like giant ships with unbalanced loads tilted to one side.

Perhaps there were exceptionally good metaphysicians among the Mayans.

They saw that one day, disasters similar to the scenes in this movie would happen worldwide, especially in the USA.

Thinking that such great land fragmentations and disasters would not be possible with earthquakes and storms, they said, “This is the apocalypse at best. Otherwise, such things will not happen on this planet.”

I wrote this a conjecture recently, but I think it needs to be considered and talked about.

Perhaps the metaphysicians in question were very close to determining the date, but they did not quite hit the mark.


Maybe 2023 or 2024 or 2030, such things will happen, and they made minor mistakes in determining the date and understanding and evaluating what they saw.


The apocalypse did not break in 2012, the date they determined, even though they surprisingly have a lot of information and are an exciting community whose secrets are still unsolved.


It is helpful to sit down and talk about why the Mayans, who were surprisingly accurate in many aspects, were wrong in this regard.


Could it also be that alien species have partially destroyed the so-called underground plate movements, due to which parts of some settlements have become uninhabitable?

Could these rapid changes be interpreted as the very rapid shrinking of the plates in question and could be mistaken?

Could some alien species even be expanding parts of their habitat over time? Could it be that scientists from the people of the world are making inaccurate comments because they do not know this?

There’s also this part. While such underground settlements were being built in the past technology eras, could they have preferred the places where magma activities were first?

Could they have turned magma into energy/fuel?

Could some volcanoes in the world, not on the coasts of the continents but somewhat inland, be artificial?

Could the alien species that make and use them decide when to spew lava?

UFOs that quickly entered the volcano were recorded by different people at many other points worldwide. Why do these UFOs go inside volcanoes?

Where do they go from there? Do they always come back?

That’s why I put off telling many things I know for decades, but let’s say this much now. These are systems that can be made similar even with the science and technology of our world.

These are no longer things that can be said as “it can’t be, it’s not possible, this is a frivolous claim.” If the people of the world did more research, if those who research and talk about the issues were more honest, I would explain such matters in a shorter time and more detail. Otherwise, it is not helpful to tell, and there are even harms.

Now that I think about it, I should add that too. Volcanoes are more needed in one way or another. Things that make the surrounding soil fertilize and cultivate very well. If real/honest scientists are left in this world, they will come out and explain them with scientific-level details and visuals/reenactments.